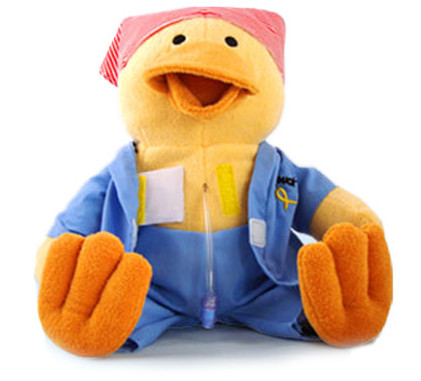 Aoibheann’s Pink Tie “National Children’s Cancer Charity” was set up in 2010 by Mick Rochford and Jimmy Norman after the tragic loss of Jimmy’s daughter Aoibheann to cancer aged just 8 years. During Aoibheann’s year long battle with this dreadful disease, the family found little or no financial or practical support  for children and their families.

Jimmy and his family had a large support network of friends and family but found that many on the ward had virtually no support at all.

When Aoibheann passed away the men wore pink ties at the funeral which was Aoibheann’s favourite colour. The charity was formed in her memory to remedy the lack of support for other children and their families going through treatment.

Families of children diagnosed with cancer are completely and utterly focused on their sick child. The regular travel to Our Lady’s Children’s Hospital from all over Ireland, the extended overnight stays consume all waking moments during this battle and the day to day necessities of life fall by the wayside or become impossible to manage. Medical cards are incredibly difficult to get if either spouse is in employment, mortgages, utility bills, motoring costs and general household bills become lost in the mire of the battle as they struggle with one of life’s worst nightmares. Phone bills, accommodation costs and medical bills become a huge burden for the parents who have to endure the nightmare of watching their child battle cancer.

Aoibheann’s Pink Tie will help and offer practical support to the families of children diagnosed with cancer and who are attending St John’s Oncology Ward in Our Lady’s Children’s Hospital. Focused on children attending the only treatment center for childhood cancer in Ireland, we will support the complete family unit, of parents and siblings, who may not understand what is happening to their Brother or Sister.

Aoibheann’s Pink Tie mission is to provide practical and financial support available to children suffering from cancer in Ireland and their families.

A future where Aoibheann’s Pink Tie, and society in general, will embrace the particular needs of children (and their families) during their battle with cancer, providing the supports to allow the family to focus on their wellbeing, their support of each other, and the treatment and recovery of their child.

We provide practical, emotional and financial fall back to those families who need it. The support varies case by case as almost every situation is different.

Families are referred to us by the social workers working on oncology wards primarily in St. John’s Ward in Our Lady’s Hospital in Crumlin.

Aoibheann’s Pink Tie “National Children’s Cancer Charity” receive no government funding and support is from the generosity and tireless work of volunteers throughout the country and beyond. Aoibheann’s Pink Ties work is completed by a dedicated volunteer team and with only one part time paid employee.  In 2014 Wages comprised 1% and expenses 6.5% of overall donations received.

On the 22/1/2009 our beautiful kind hearted daughter Aoibheann was diagnosed with cancer she was seven years of age at that time, as far as we were concerned a beautiful healthy child. Annmarie my wife was the first to notice that something was not quite right, Aoibheann was displaying behavioural changes and experiencing tiredness and a pale complexion, I never thought that anything was wrong I just thought it was growing pains and a little girl just growing up. When the doctor told us it was cancer and was at stage four; a lot of Annmarie and myself died in that moment. The reason I spent so much time on Saint John’s ward the specialist children’s cancer ward in Dublin’s children’s hospital was simple; we also have twin girls who at that time I found impossible to look after, I was no good at giving them the attention they required and we decided that I would stay in hospital with Aoibheann as it was the best way, though Aoibheann would have far preferred her mother. After a huge operation to remove a two and a half kilo tumour from our seven year old baby girl a tumour as big as the baby she will never have, I was given the news that the company I worked for closed down SR Technics Aircraft maintenance Dublin Airport, I actually didn’t care we only cared about saving Aoibheann, I felt in that moment that if anyone was reading my story they would burn the book and bury it in concrete. In all of this time I observed so much hardship on the ward the emotional and economic devastation to families was something I could not comprehend. In all of this horror it may seem strange but we were lucky in the family and friends around us, my friends in Dublin airport were incredible the village of Dunboyne our families rallied around us and my great friend Mick Rochford stood beside me through thick and thin. This was where the seed started to grow in my mind of a practical organisation to help families of children fighting cancer. Six years on we are now proud to say Aoibheann’s Pink Tie the children’s national cancer charity.

Tweets by @APTjimmy
Please enter the Page ID of the Facebook feed you'd like to display. You can do this in either the Custom Facebook Feed plugin settings or in the shortcode itself. For example, [custom-facebook-feed id=YOUR_PAGE_ID_HERE].

Aoibheann's Pink Tie will help and offer practical support to the families of children diagnosed with cancer and who are attending St John's Oncology Ward in Our Lady's Children's Hospital.

Sign up today to receive info on upcoming events and the latest news from the charity.